Not only the weather is better in Iceland during summer, but the days are longer! Indeed, there’s a phenomenon called “Midnight Sun”, describing how the sun never sets, especially in the month of June.

In brief, it is when the sun is visible at midnight in either the Arctic or Antarctic Circle. These places include Northern Norway, Canada, Northern Russia, Greenland, and Iceland. Everyday from the end of February, the days are getting longer. From this time until October, the daylight changes so rapidly you can feel it day by day. The beginning of the month can vary about 4 hours from the last day of the month!

May, June and July are the brightest months of the year. If the weather is good, you’ll have the chance to experience amazing long-lasting sunsets! You’ll see that during the month of June, you will never really experience any darkness, even though direct daylight is only measured for 21 hours. The sun never completely sets and rises again before the light has left, it is called the “civil twilight”. That is a scientific term, basically meaning a long-lasting golden hour. On clear days, there’s enough light to see what you’re doing outside! This way, you have infinite possibilities of visits during summer.

In Iceland, the highest peak in the daylight period is the day of the Summer Solstice, also called Sumarsólstöður in Icelandic. It takes place from the 20th of June to the 22nd. In 2021, the Summer Solstice will be on the 21st of June, as well as in 2022 and 2023. In 2024, it will be on the 20th of June! This day, the sun still shines at midnight, hence the name “Midnight Sun”. In Reykjavik, the sun will even start to set after midnight and will rise up again before 3AM. At the end of august, the day will go back to normal little by little. 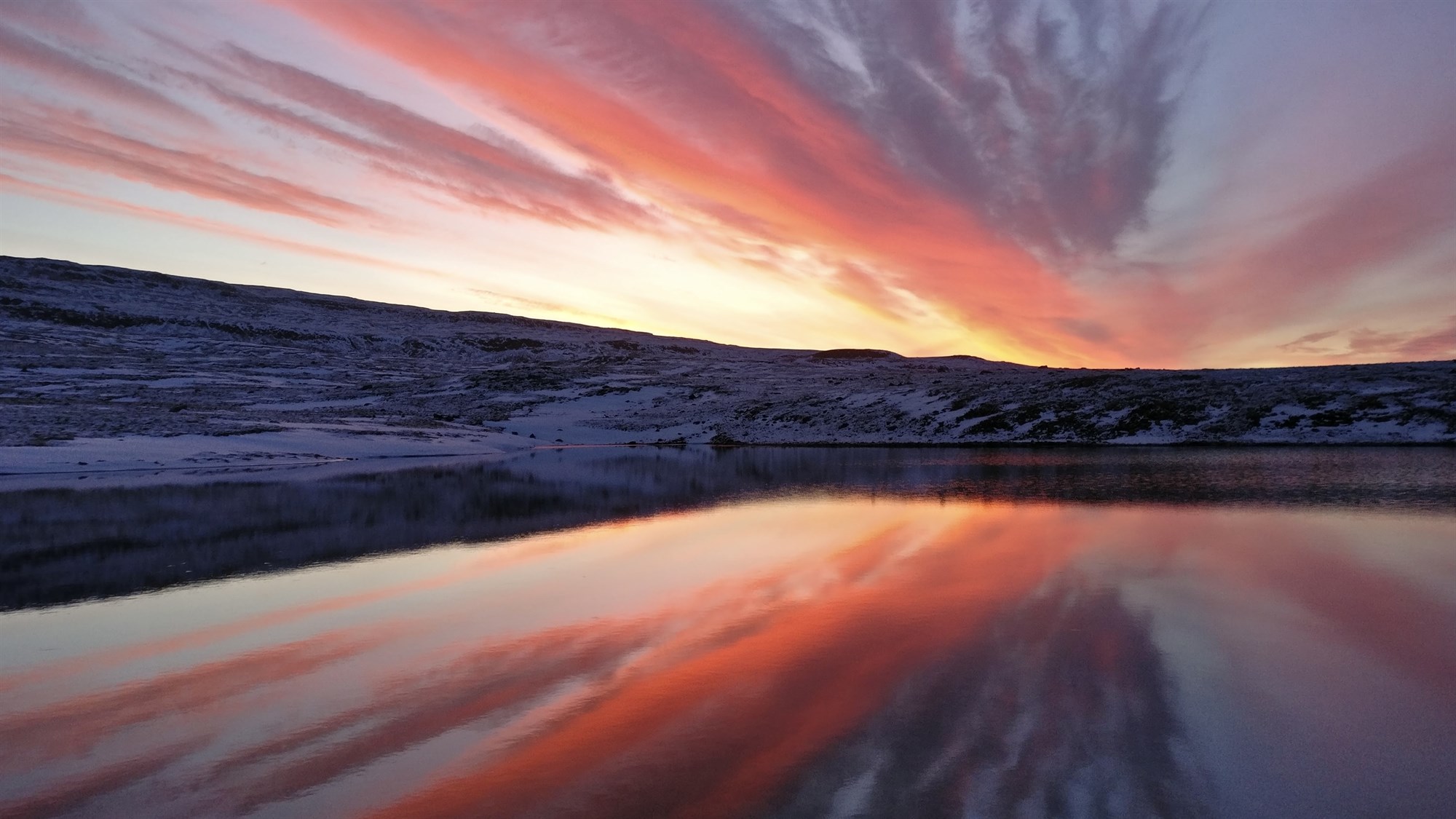 Why does the midnight sun occur?

It takes one year — 365 days — for the Earth to orbit the sun. In addition, the Earth rotates simultaneously on its own axis to create what we know as a 24 hour day. The two trajectories from the Earth’s rotation (the Celestial Equator) and its orbiting (the Ecliptic) form a 23.5° angle, giving us the four seasons, as well as the Midnight Sun and the Polar Night (the opposite phenomenon, when nighttime lasts all day). The more North you are, the longer the sun will stay above the horizon the days after the Summer Solstice. The North Pole and the South Pole demonstrate how this works, as both locations alternate between six months of the Midnight Sun and six months of the Polar Night.

Where to see it?

Everywhere! The good thing about the Midnight Sun is that you don’t have to look for a good place to view it. You can enjoy this beautiful light whether you are in the city or on the beach, watching the sun slowly fading dip below the horizon before peeking back up. Unlike Iceland’s other great cosmic phenomenon, the Northern lights, you don’t need a clear and dark sky to experience it. No need to find an isolated area to enjoy it! Any place of your choice will be the best. Enjoy your favorite places with a golden hour light that will allow you to take beautiful shots. If you enjoy taking pictures, you will have hours of the gorgeous golden colours to capture the perfect moment; no need to rush before the sun sets (or rise).

In case you wouldn’t know where to begin, we picked up some nice places that you could visit to experience it! 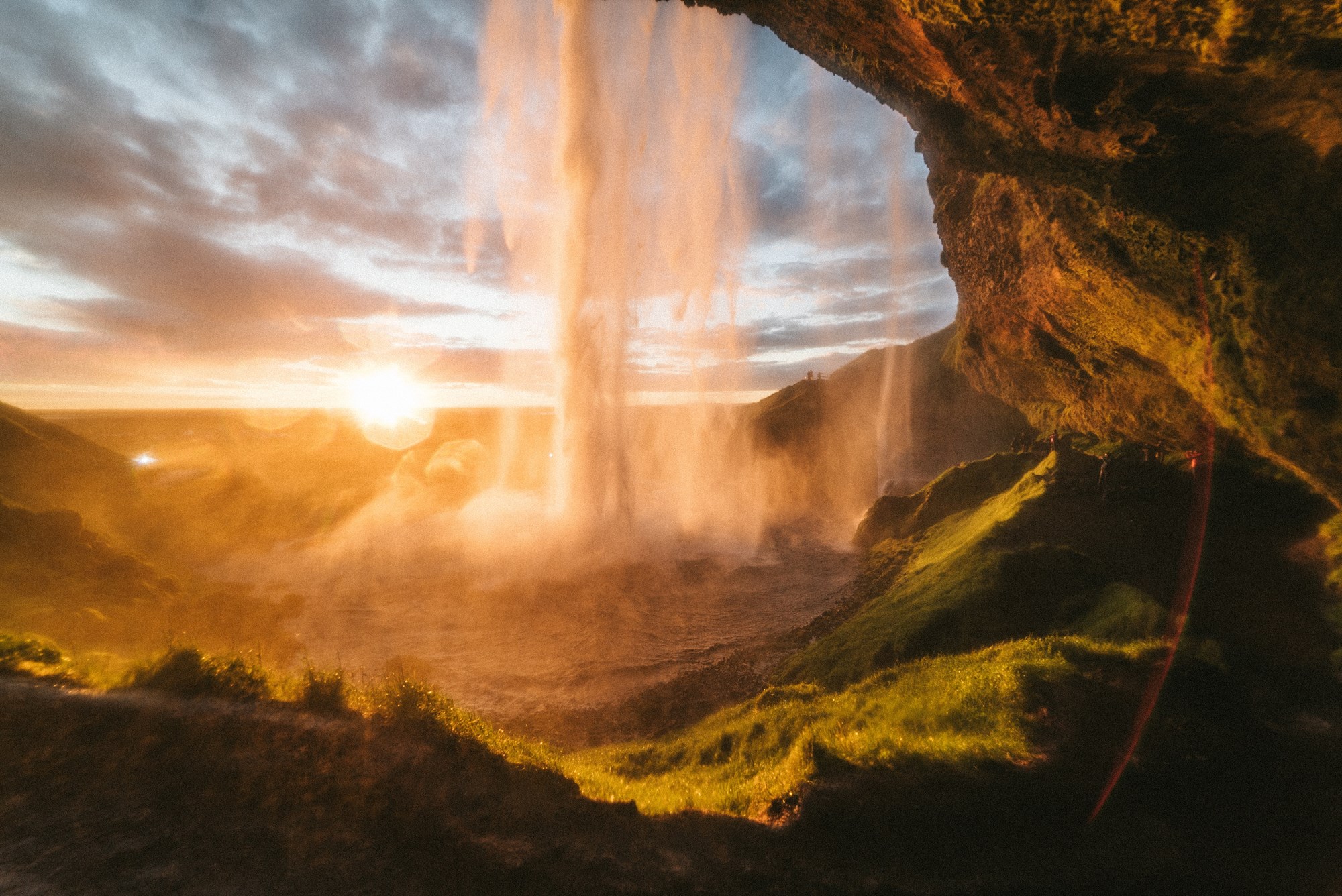 You should definitely visit Southern Iceland during the Midnight Sun season. The landscapes are various and beautiful all year long, but imagine the waterfalls with a beautiful golden light… even better! Seljalandsfoss is very famous since you can go behind the water curtains and watch the waterfall plunge into a beautiful pond, with a breathtaking view on the sunset. The good thing is, it’s 1h45 drive away from Reykjavik! 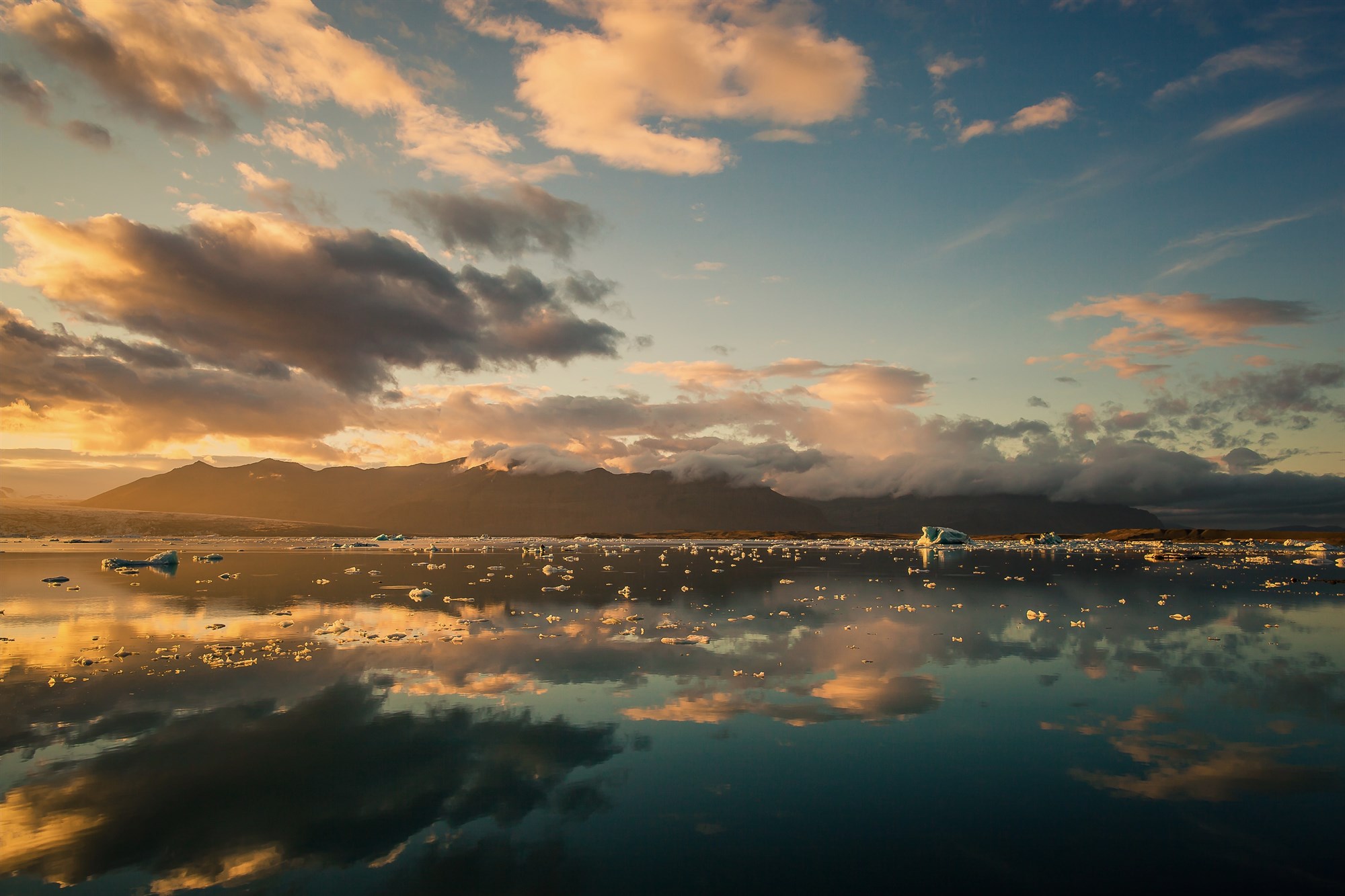 Jökulsárlón lagoon, a treasure. When the Midnight Sun season’s here, you can admire the beautiful colour of the sky through the lagoon’s water, like a mirror. Sparkling ice chunks are floating all around for a unique landscape, with a view on the huge Jökulsárlón Glacier. You can also visit the Diamond Beach nearby. If you are visiting this area during the second weekend of August, you will get the chance to see the annual fireworks show that lights up the Jökulsárlón Glacier Lagoon. (https://visitvatnajokull.is/the-annual-fireworks-show-at-jokulsarlon/) 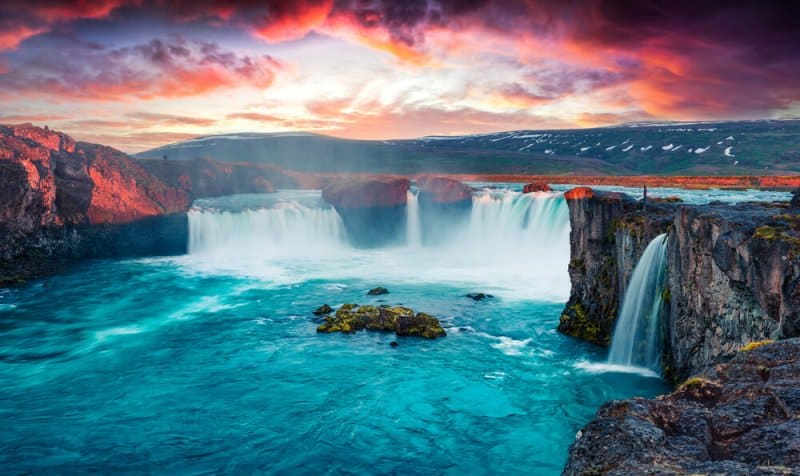 The waterfall of the gods. Goðafoss itself is picturesque. Indeed, it is one of the most famous waterfall in North Iceland. Add the vibrant colours of the Midnight Sun for a perfect combination! The experience will be unique and so will be your photos. While this waterfall is special, any other waterfall under the Midnight Sun will be a breathtaking view.

Our tours: 7 days ring road tour, 7 days luxury tour to the Westfjords and the North of Iceland 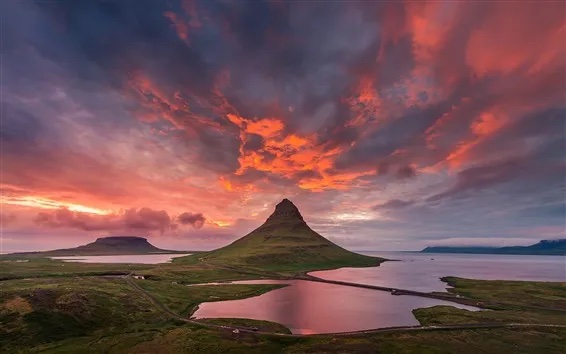 If you go on a trip to West Iceland, you’ll probably stop at Kirkjufell: the iconic mountain of the Snæfellsnes peninsula. Through the seasons, the famous mountain always amazes. Once again, the landscape will be even more spectacular with a beautiful Midnight Sun sky! 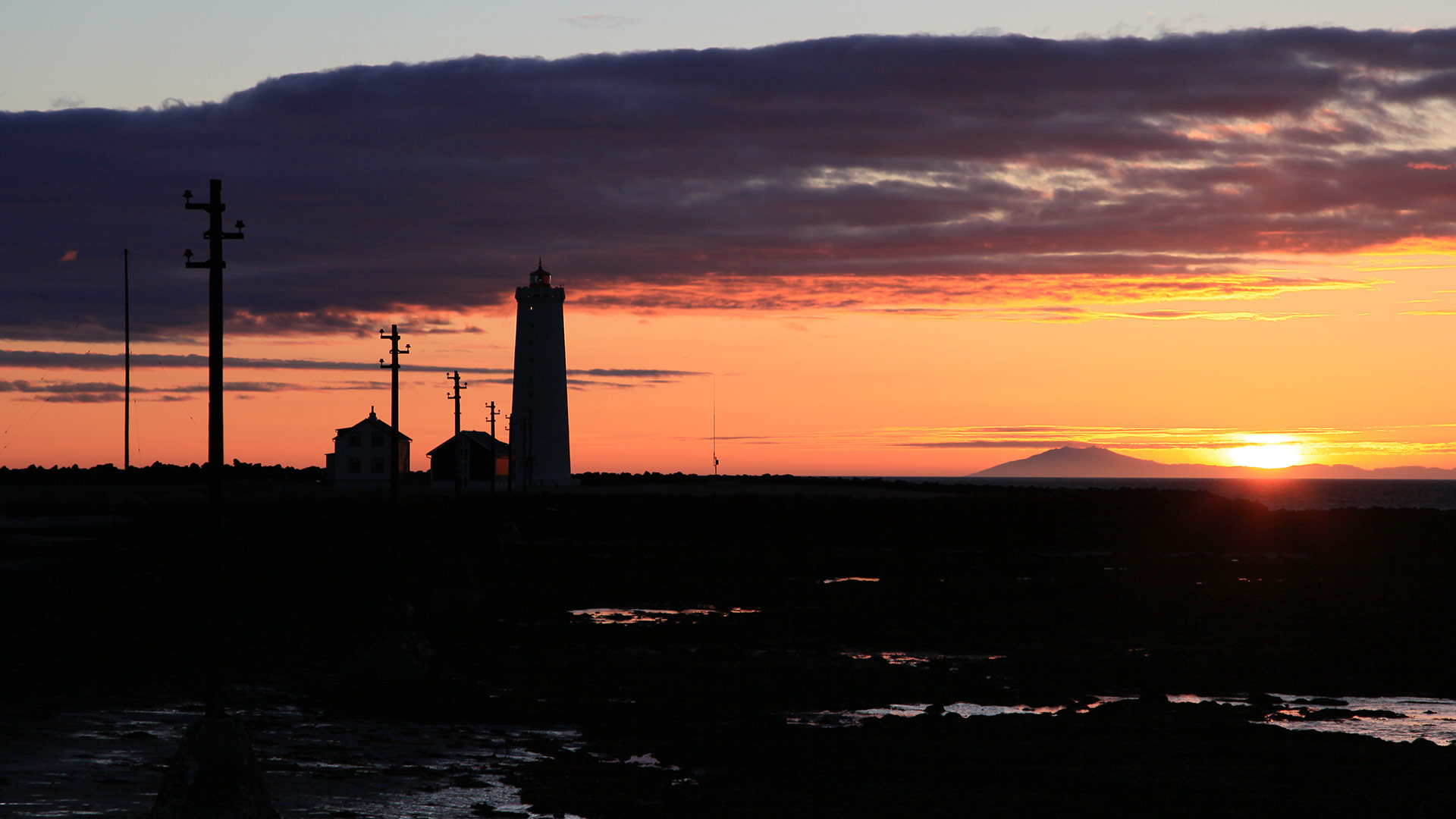 Simply, the capital city. There are numerous location in Reykjavik and its surroundings to enjoy the Midnight Sun views. There are plenty of bars with outdoor seating areas in the city and during the summer, they stay open until late! Nearby, there’s the picturesque Grótta lighthouse, the perfect spot to watch the sunset. Just a few minutes away from the city center, it’s the perfect place in the city to view the Midnight Sun. Mountains, glaciers, the ocean: the perfect combo of what you can see from Grótta. Enjoy a walk along the ocean as the the sky becomes pink, orange and purple.

As the days get longer during this period, you can enjoy many activities until late at night.

Here are some examples:

● Sky Lagoon — the brand new spa in Reykjavik — will be the perfect place to see the Midnight Sun! A breathtaking view on the ocean combined with relaxation and a unique ritual… 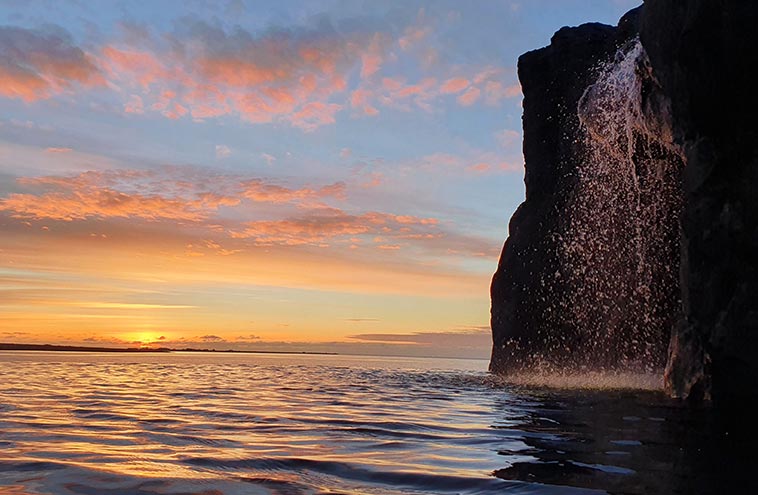 ● Midnight run: Reykjavik Color Run: this fun race is a unique 5-km race involving a lot of rainbow-colored powder paint! The Reykjavik Color Run is one of the most popular activities both Icelanders and international travelers want to take part in.
Mýrdalshlaupið – The Mýrdals Race: the event is based in Vík, a nice town in Southern Iceland, where runners can enjoy beautiful views from the entire trail.

● Music festivals are also very popular in the country! Secret Solstice is the most famous one during the summer.

But, what about sleep?